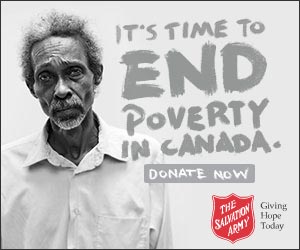 The mass surveillance, information gathering and analysis of data that qualifies the internet tailor advertisements for users.

Since I dismiss those ads as price for the “free” service; reading an article or browsing a website, I don’t see them. It was a different story yesterday.

An article headline in a British newspaper website caught my attention. When I went to the page I was greeted with the following advertisement: As per Statistics Canada 2006 Census, Canadians identified as Black constitute 2.5 % of the entire Canadian population. Still, the Salvation Army had no qualms about choosing a Black face to represent poverty, rather than someone from the majority population. Talk about exploiting a Black stereotype to secure donations.

Furthermore, according to any and all metrics that define poverty, First Nations/Aboriginal communities experience higher levels of poverty than everyone else.

As detailed in Poverty Trends Scorecard Canada 2012: “The rate of poverty among Aboriginal peoples living off-reserve was 15.2% in 2010, compared to 9.0% for all of Canada.14. In 2005, according to the Census, it was estimated the poverty rate for the entire Aboriginal population (i.e., both on and off-reserve) was 18.7% among Aboriginal families and 42.8% among unattached individuals.”

Pimping Blacks to raise funds for “white” institutions is nothing new.

The Montreal Gazette is a broadsheet format sized paper. Its Saturday November 16, 2002, paper featured a full-page advertisement soliciting donations for its Christmas Fund.

The photograph in the ad was that of a young Black kid with a football under his arm, with the following slogan: “Your donation is being kicked around.” Ergo poor Blacks are being helped.

Racism has it that all must believe that poverty and incarceration are the preserves of Blacks.

A December 2008 study, published in the Proceedings of the National Academy of Sciences revealed: “Changes in social standing such as falling below the poverty line or going to jail made (white) people more likely to be perceived as black and less likely to be seen as white.”